The Houston Rodeo 2022 dates occur February through March, 2022 at NRG Stadium (Formerly Reliant Stadium) in Houston, Texas. The performers and houston rodeo lineup will be announced in January. Check here for the full 2022 Houston Rodeo Schedule. There are live houston concerts every year with some of the very biggest names in country music on hand to entertain the crowds and events in houston. Elvis Presley has entertained at the Houston Livestock Show and Rodeo as well as George Strait, Willie Nelson, ZZ Top, Lynyrd Skynyrd, Pit Bull, Brad Paisley, Kid Rock, and Garth Brooks, to name just a few. The shows that they put on every year are some of the best in the country and a huge draw for the city of Houston. Buy your Houston Rodeo Tickets right here. 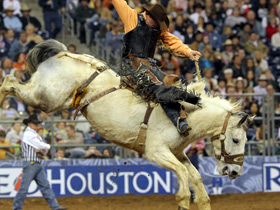 Every year at NRG Stadium in lovely Houston, Texas the world’s largest live entertainment and livestock exhibition, the Houston Livestock Show and Rodeo 2022, is held. Not only is it the biggest in the world but it is also the home of the rodeo season's richest regular event, making it of course a “must” for some of the best riders, ropers and bronc busters in the world. The Houston Livestock Show and Rodeo lineup has certainly changed since it was held in the Astrodome, and is now an incredibly large, complex and of course entertaining event. In 2003 it was moved to Reliant Stadium because of the newer, better facilities to be found there and the fact that it can seat quite a few more people.

If you're wondering what it means to be the &quotworld's largest" rodeo, all you need to know is that, in 2013, over 2.5 million people attended the event over the 20 days that it was held. During that time more than 28,000 volunteers were helping to run all of the special events that the rodeo is famous for, including the Downtown Rodeo Roundup that's held every year near the Houston City Hall, the ever popular Downtown Rodeo Parade and the ConocoPhillips Rodeo Run, which includes a 10K and 5K run as well as a 10K and 5K walk. If you're a big fan of barbecue you of course wouldn't want to miss the Worlds Championship Bar-B-Que Contest either.

If you're interested in buying Houston Livestock Show and Rodeo 2022 tickets for the event you'll be able to get in on some of the best championship rodeo action in the country that includes livestock competitions, the rodeo lineup, HLSR concerts, a wonderful Carnival that's fun for the entire family, pig racing of course, loads of shopping and, since it is a livestock exhibition, livestock sales and auctions.

One of the most popular parts of the entire Rodeo is the Rodeo Uncorked! International Wine Competition, where winemakers from around the world bring their best bottles and vie for the chance to win World Champion status. One of the practices that sets the Houston Livestock Show apart from the rest is that, starting from all over Texas, Traditional Trail Rides begin days before the event as trail riders on horseback, with their covered wagons in tow, make their way to downtown Houston for the big Show.

Of course it wouldn't be a Houston Rodeo without the Go Texan Day event that the city of Houston celebrates every year. During this fun and certainly picturesque day-long event that always occurs on the Friday before the Houston Rodeo begins, all of the attendees and indeed people from all over the city are encouraged to dress in traditional Western wear, a sight that you definitely must see at least once in your life.

Also popular during the Houston Livestock Show and Rodeo (HLSR) are the amazing HLSR concerts that are held every year during the event. If you are interested in getting HLSR concert tickets you'll be glad to know that some of the world's biggest and best recording artists have been featured at the show during its history including the incomparable Elvis Presley, George Strait, the great Willie Nelson, Lynyrd Skynyrd, Bon Jovi and of course that little old sh*t kickin' band from Texas, ZZ Top. If you're going to be at the Houston Livestock Show and Rodeo 2022 you will definitely want to attend at least one of the major concerts that will be held during the 20 day event.

Since the Show began in 1932 it has been a charity to benefit Texas' youth. Indeed, the Houston Livestock Show and Rodeo has contributed scholarships, endowments, research and other educational programs to the tune of $330 million. They have also donated to calf scramble participants, Junior show exhibitors and School Art participants as well.

It's a huge event to be sure and with a charity event this big comes need for lots and lots of volunteers to help out all of the visitors and of course sell the HLSR tickets. Last year there were more than 27,000 volunteers helping out at the show and donating their time and effort on over 100 different Show committees. On average a committee member will donate nearly 70 hours of their time to the show each year and, in every single ZIP Code that Harris County has, you'll find neighborhood committee members living there. It's a diverse group of people, to be sure, with 60% of the volunteers being men and 40% women.

The 2022 Houston Rodeo tickets sales also support law enforcement and emergency workers as well as first responders through a number of different programs including Camp Houston Fire as well as the Houston Community College Public Safety Institute. Through their Holocaust Museum Houston they are also contributing to the teaching of historical and scientific events. The same can be said for the Health Museum as well as the Children's Museum of Houston. The Glassell School of Art and the Western Art Academy Workshop are also on hand at the Show to help raise the creativity factor through generous donations.

During the 20 day Show there are a wide variety of events that will appeal to practically anyone and the Houston Livestock Show and Rodeo lineup for this year is even better than the last. The Rodeo Parade for example has been held since the Show first began and was held for the first time at the 1938 Houston Livestock Show. That first parade included a Drum and Bugle Corps as well as two other bands and was headed up by Mounted Police and a variety of dignitaries from the city as well as from county and state levels as well, all of them riding on horseback of course.

Over 115 different groups actually are included in the Parade including cowboys and cowgirls from the 15 different trail rides, 20 gigantic and beautiful floats, over a dozen university and high school marching bands and approximately 15 commercial wagons and stagecoaches. Of course there are also the show officials and other dignitaries either on horseback or in vehicles specially decorated for the Parade.

One of the most famous aspects of the Houston Livestock Show and Rodeo 2022 are the Trail Rides that start from all over Texas and end up at the show to ride in the Rodeo Parade. The first trail ride was initiated in 1952 and publicity from that ride, the Salt Grass Trail ride, was enough to attract many more people to not only join that particular ride but also start their own Trail rides into the Houston Livestock Show. Memorial Park is the destination for all of the Trail riders and the night before the show begins they converge there before heading down to Memorial Drive and on to Texas Avenue where they all lineup for the Rodeo Parade.

Another extremely popular event is the Calf Scramble, an event that features 28 students and 14 calves. The goal of the Scramble is simple; capture a calf, put a halter of it and lead it back to the "winners square" to win. Held nightly between some of the major events going on in NRG Stadium, every student was able to bring a Into the winners square is given a certificate for $1,250. For the really young cowboys and cowgirls, those between five and six years old, there's a new attraction called Mutton Bustin' where they tried to ride a sheep and hold on for at least eight seconds. Trust us when we tell you that the “cuteness factor” on this one is pretty much off the charts.

If you're interested in going to the Houston Livestock Show and Rodeo 2022 and you're looking for HLSR concert tickets or need to know the Houston Rodeo Dates 2022 and the rodeo lineup, now is definitely the time to start searching online and planning for your trip. It's the biggest Rodeo event in the world and features some of the best of, well, everything from all over the country. If you are a rodeo fan it's an event that you have to go to at least once in your life, if not every year. 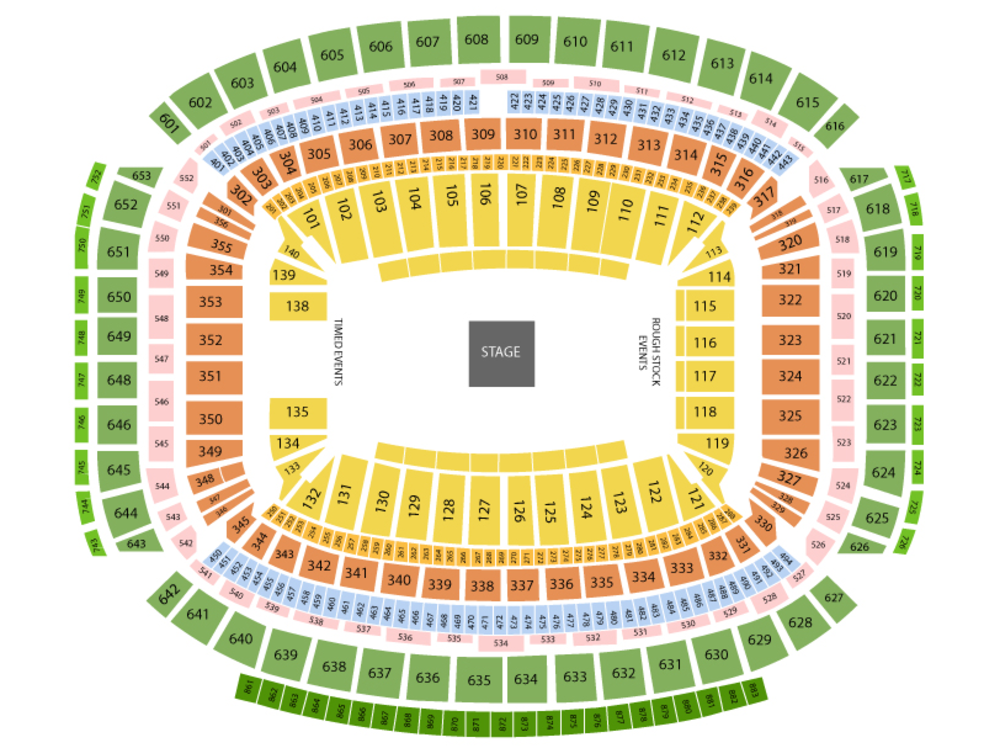 Directions to the Houston Rodeo at NRG Stadium in Houston, Texas 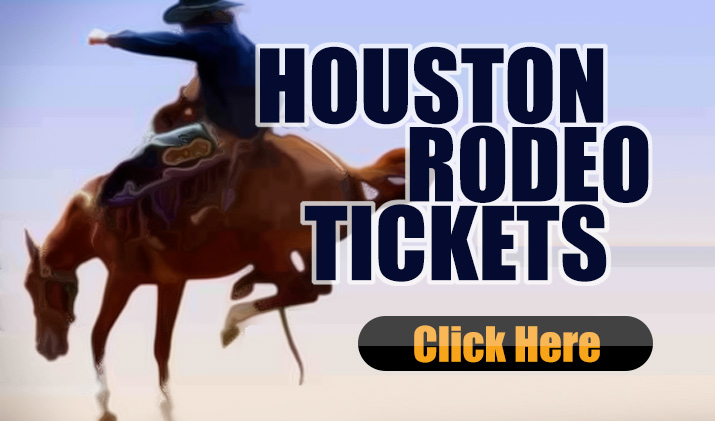