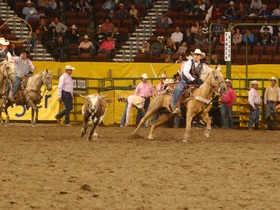 The National Finals Rodeo (NFR) was established in 1958 and is today a championship event featuring some of the best from all over the country. It’s held every year by the Professional Rodeo Cowboys Association (PRCA) and judges cowboys and cowgirls in 7 main events, six of which include calf roping, steer wrestling, saddle bronc riding, bull riding, team roping and bareback bronc riding. The seventh event, the steer roping competition, is held separately. The top 15 money winners in each of these 7 events during the National Finals Rodeo season are invited to compete against each other for the world title. Anyone wishing to go to this prestigious event can purchase National Finals Rodeo discount tickets if they order them well enough in advance.

Indeed, the Nationals Finals Rodeo 2022, for many a professional rodeo cowboy and cowgirl, is the pinnacle of the sport. It’s a 10 -day action-packed spectacular, with the 15 contestants from each rodeo event, seasoned professionals all, going head-to-head for the title of “World Champion” . Held in Las Vegas, Nevada, the National Finals brings hundreds of thousands of visitors from around the country, and the world, to cheer their top Rodeo contestants in what some call one of the most exciting sports that America has to offer. It’s a long road to the National Finals Rodeo. Be sure to get your NFR tickets early.

The 15 contestants who are given an invitation to the National Finals Rodeo are the absolute best in the sport and have the highest earnings for that particular NFR rodeo season. Their season actually begins in October and has a cutoff in September of the following year, between which dates the competitors try to ride in as many rodeos as they possibly can throughout the country. In the National Finals Rodeo, bull riding combined with all of the other events means that it’s definitely a full-time job for anyone who wishes to be invited.

In their valiant efforts to make it to the top 15, these athletes put their heart and soul into every single rodeo performance they make. In order to secure a spot in the nationals, a cowboy will enter as many events as possible and try to win as much prize money as possible in the time allowed. Incredibly, there are some contestants that enter 2 or 3 rodeos every week in order to win a possible spot in the top 15 at NFR.

If you’re not much into traveling, the Rodeo lifestyle wouldn’t be for you as traveling is pretty much mandatory. You’ll often see cowboys and cowgirls teaming up together to make the traveling a little bit easier, taking shifts behind the wheel to make it to the next rodeo safely, gear and animals in tow. “Rough stock riders”, since they ride different animals from location to location, have it a little easier as they don’t need to pull livestock, horses or bulls everywhere they go but instead can fly from destination to destination, cutting down greatly on the time they spend on the road.

As anyone who has been there can tell you, getting National Finals Rodeo tickets is difficult so you should do it ahead of time. The reason is that the National Finals Rodeo is one of the most exciting rodeos in the world. Why? Because of the fact that, over 10 consecutive nights, they don’t just have one Rodeo they actually have 10 complete and individual rodeos, with winners in every category, every single night!

What that means for the contestants is that each of the top 15 , all of whom are entered into the 7 major events every night, will have one chance, or run, per night to show their skills. One chance to do their best and score the highest.

There is also a competition to win the “average” every night and the extra money that it brings. This average is the number that, at the end of every night, is tallied to get the average (duh) of all of the particular competitors runs up until that point. Every night there’s a winner, and it’s the person with the highest average point total. The cowboy that has the highest average point total and the most successful runs in the “rough stock” events is also awarded bonus. The lowest average time is what the competitors in the timed events are looking for on all of their completed runs.

How to take in everything at the National Finals Rodeo.

The National Finals Rodeo 2022 schedule starts at the beginning of December every year as glittery Las Vegas transforms itself into “Rodeo Central” for 10 days. Everywhere you look there are huge marquees featuring not only the names of famous celebrities but also famous cowboys and cowgirls, all of them flocking to Sin City to enjoy a big Western hoedown. During the 10 day event various entertainers host special National Finals Rodeo concerts across the entire city while tourists keep their eyes peeled for a celebrity sighting.

Home to the National Finals Rodeo since 1985, thousands of fans flock to The Thomas and Mack Center every night for 10 nights of Rodeo excitement in a row. Inside the stadium itself the mood in the air is electric and contestants, as well as spectators, can feel it. These are some of the best cowboys and cowgirls in the entire world and, over the next 10 nights, they are going to be competing for the ultimate glory, the title of “World Champion”.

Throughout the center you’ll find hundreds of vendors selling a wide variety of goods including everything from some of the best cowboy boots in the country to little toy stick horses for rodeo fans who can’t quite ride yet. An incredible variety of food is sure to be found at the National Finals Rodeo 2022 as food vendors offer everything from small snacks to complete meals and of course plenty of cold beer. It’s a full sensory experience to be sure, as the earthy musk of giant beasts wafts into the stands and mixes with the smell from the food vendors while the rumble of hundreds of groups can be felt throughout the place.

As for the National Finals Rodeo history, the first event was, unsurprisingly, held in the city of Dallas in 1959 and stayed there through 1961. From 1960 to 1964 the event and the competitions were hosted in Los Angeles and, in 1964, Oklahoma City was given the chance to be the host. They held their first Nationals in the State Fair Arena and hosted over 47,000 fans. The State Fair Arena did a fine job of hosting all the way through to 1978, after which it was moved to the Myriad Convention Center. If you are wondering why so many of these states would want to host the Nationals, consider that, for Oklahoma City, the event brings in an annual revenue of close to $8 million. That’s an awful lot of money for a 10 day show.

Even though the Oklahoma City Council was considering a new $30 million arena, Las Vegas put in their bid for the event in 1984 and won the rights to bring the National Finals Rodeo to their fine city. Since then the home of the NFR has been Thomas &amp; Mack Center and today its their biggest client. During the 10 day event the Center hosts over 170,000 fans and helps to turn Las Vegas into a city full of Western folk, and their beasts of burden, at least for a couple of weeks.

Although Oklahoma City has put in various bids to have the Nationals moved back, every year they are outbid by Las Vegas (and their very deep pockets). In 2011 they did become the host city of the RNCFR, which is the PRCA’s Finals and their semi-pro series. The current contract that Las Vegas has with NFR ended in 2013 and hosting the RNCFR is seen as a way for Oklahoma to prove that the crowds do exist to bring the event back to their city once that happens.

Still, one of the most popular destinations, at least for shoppers, is the longest-running gift show at the Wrangler National Finals Rodeo, the Cowboy Christmas Gift Show. This is actually the only “original” to show at the event and is located in the North Halls of the Las Vegas Convention Center. Hosting 400+ vendors from all over the United States and Canada, the Cowboy Christmas Gift Show is spread out over 300,000 square feet of the convention center’s space and features a huge variety of unique products, from customized jewelry to cowboy boots and spurs (of course), original art, furniture, Western wear, pottery and many other handmade crafts. Since the actual rodeo portion of the event is held at night, visitors and shoppers from all over the world are able to take it vantage of the Show during today without missing any of the intense National Finals Rodeo action.