The third and final leg of the coveted Triple Crown of thoroughbred horse racing is the famous Belmont Stakes that is held at Belmont Park every year in June. The Belmont Stakes is a grade 1 stakes race for 3 year old thoroughbred colts, geldings and fillies. Colts and geldings carry a weight of 126 pounds and fillies 121 pounds. The Belmont follows the Kentucky Derby by 5 weeks and the Preakness Stakes by 3 weeks and is always held on a Saturday. It is one of the most popular races in the United States and indeed ranks 4th among all races in North America.

Attendance at Belmont usually surpasses all other stakes races and is usually only beaten by the Kentucky Derby, the Preakness Stakes and the Kentucky Oaks. In fact, in 2004 it was seen by a TV audience of nearly 22 million viewers, ratings that weren’t seen since the famous Seattle Slew won the Triple Crown in 1977.

The very 1st Belmont Stakes was held in 1866 at Jerome Park Racetrack, a venue that was financed by August Belmont, Sr. and after whom the race was named. It was held there until 1890, moved to Morris Park Racecourse for 15 years, and then moved again to the new Belmont Park that opened in 1905 in Elmont, New York. The new course was just outside of Queens, NY on Long Island and was 430 acres in size.

In 1911 and then again in 1912 the race was actually cancelled because of New York’s anti-gambling laws. It was also moved for 5 years to the Aqueduct Racetrack from 1963 to 1967 because the Belmont track was undergoing restorations at the time. The winning horse and jockey are presented one of the most coveted and prestigious of horse racing’s trophies the August Belmont Trophy.

The Belmont Stakes is considered the most challenging of the 3 Triple Crown races due to the fact that it is the longest at 1.5 miles. Since the average 3 year old horse isn’t accustomed to this distance positioning and timing at the Belmont Stakes is critical. It’s called the ‘Test of the Champion’ because of this and indeed is a test of endurance and stamina for all of the horses involved. It is also called the ‘Run for the Carnations’ because of the longstanding tradition of blanketing the winning horse with white carnations at the finish line. This is similar to the ‘Run for the Roses’ and the ‘Run for the Black Eyed Susans’ that the Kentucky Derby and Preakness Stakes are called, respectively.

CheapTicketsASAP.com acts as an intermediary between buyers and ticket sellers to facilitate the purchase and sale of Belmont Stakes tickets, and as such is not directly involved in the actual ticket sale transaction between the buyers and TICKET SELLERS. All sales are final. As tickets sold through CheapTicketsASAP.com are often obtained through the secondary market and prices are determined by the individual seller, the prices for tickets may be above or below face value. Belmont Stakes Tickets sold through CheapTicketsASAP.com are from a third party; therefore, the buyer's name will not be printed on the tickets. Tickets may be sent by email when stated so. Please note that the name on the tickets does not affect the buyer's ability to access the Belmont Stakes event. 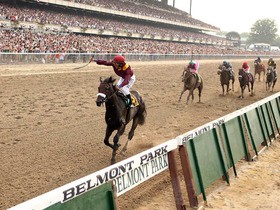