When it comes to mixed martial arts there is no organization that is better known or more respected that the Ultimate Fighting Championship, or UFC. Indeed it is the world’s biggest promoter of the mixed martial arts sport and has been hosting fights since 1993 when it started in Denver, Colorado.

The UFC is based in the United States and uses the Unified Rules of Mixed Martial Arts as the foundation of its fighting style and code. There are 8 weight divisions that are used to determine who can fight whom and, as with most major sports of this nature, the welterweight and the heavyweight divisions are usually the strongest.

The UFC’s parent company, Zuffa, LLC, is controlled by the Fertitta brothers, Frank and Lorenzo, while the UFC itself is governed by President Dana White. When the UFC first started in Denver the event was unique in that it was the first time that fighters of different fighting styles had come together to fight one another. What the reason was is simple; to see which fighting style was the best.

Fighters accomplished in different martial arts like Brazilian Jiu Jitsu, boxing, wrestling, karate and Tae Kwon Do, to name a few, came together that year to fight. During that time the vast majority of the fighters realized that only being able to fight with 1 style wasn’t always going to work and, over the subsequent 20 years, an entirely new style of fighting has been created, the mixed martial arts style that the UFC is so famous for.

UFC fighters are in fact very well-rounded fighters who can use various fighting styles and can fight well standing up us well as on the ground. The UFC has over 20 events a year in the United States and in many other countries where the new fighting style has become very popular in a relatively short amount of time.

Similar to boxing there are 3 ways to win a mixed martial arts fight. The first is by knockout with 1 fighter knocking the other unconscious, the second is by submission, where the defeated fighter has ‘tapped out’ and the final is by judges decision if there is no knockout or tap out. Weight classes range from 126 pounds to 265 pounds and, like wrestling, if a player is overweight they don’t get to fight, making the weigh-ins very important.

Finally there’s the Octagon, the special ring that was created especially for the sport. It’s 750 square feet and 32 feet across with 8 sides (hence the name) and padded surfaces to protect the fighters. Of course just stepping into the ring is very dangerous and only the best get to do it on TV. At the end of the day it’s a bit of a vicious sport and only for the very tough and very athletic. It’s also extremely popular, which just goes to show that people everywhere really love a great fight.

CheapTicketsASAP.com acts as an intermediary between buyers and ticket sellers to facilitate the purchase and sale of UFC tickets, and as such is not directly involved in the actual ticket sale transaction between the buyers and TICKET SELLERS. All sales are final. As tickets sold through CheapTicketsASAP.com are often obtained through the secondary market and prices are determined by the individual seller, the prices for tickets may be above or below face value. UFC Tickets sold through CheapTicketsASAP.com are from a third party; therefore, the buyer's name will not be printed on the tickets. Tickets may be sent by email when stated so. Please note that the name on the tickets does not affect the buyer's ability to access the UFC event. 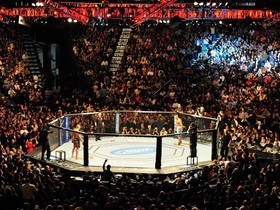